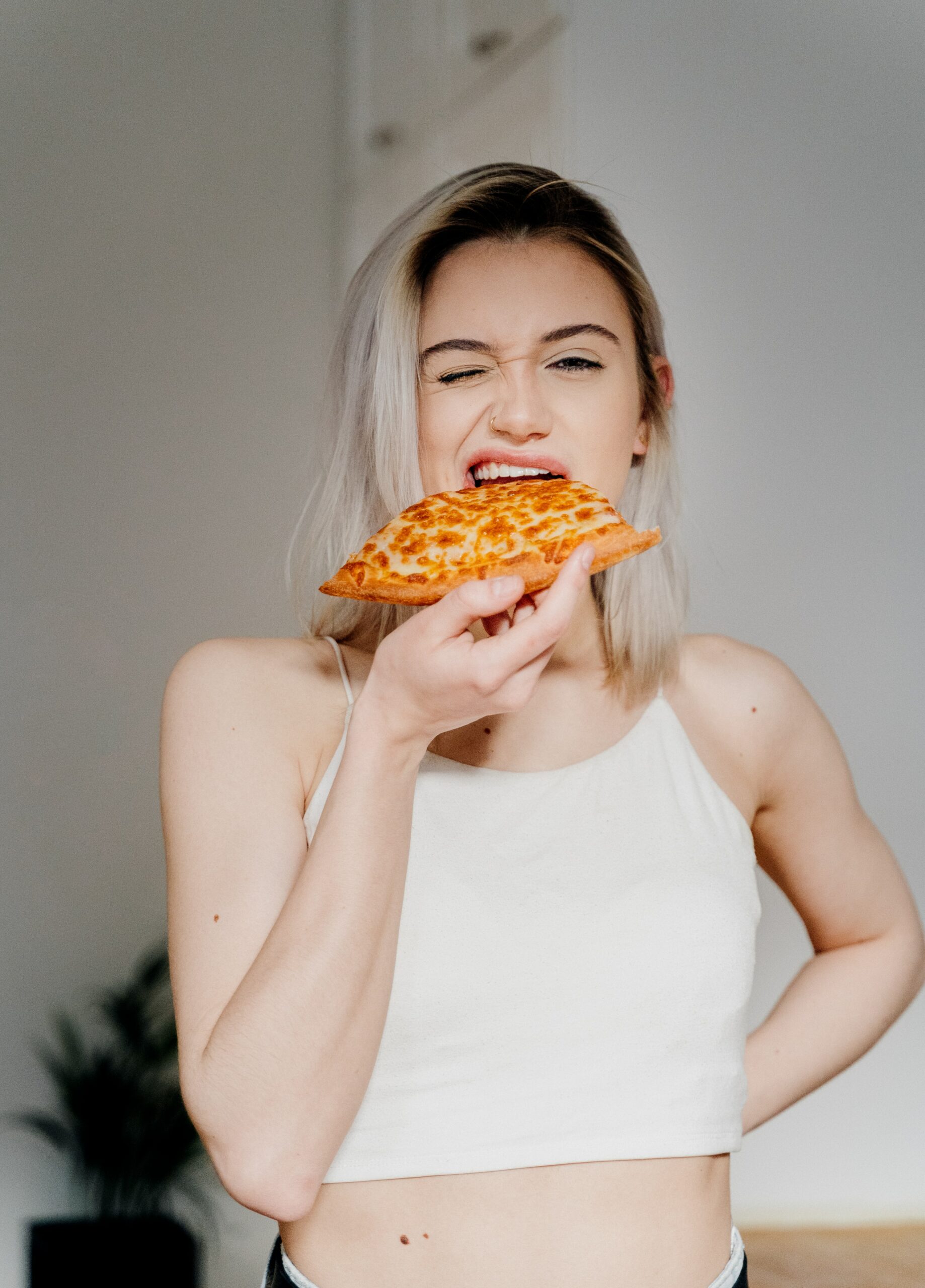 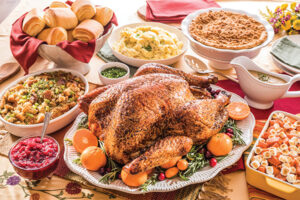 With the holidays approaching and endless food on the horizon we are all asking the same question.

Should I stop eating at a certain time to avoid gaining weight?

You have likely come across the advice to stop eating in the late evening to avoid unwanted weight gain. This popular claim suggests that late night eating is associated with obesity, increased fat mass, and decreased lean body mass. The primary argument behind this theory is that taking in calories before you are least active (sleeping) would lead to those calories NOT being expended, and thus will be stored leading to increases in weight and body fat. While this notion seems to make sense, a big caveat to this theory is that it neglects the big picture where caloric balance is about total energy in compared to total energy out, i.e. a caloric surplus would be to blame for excess storage. Albeit, trying to eat around your most active hours during the day is certainly a good behavior to have as the energy intake can help to foster your activity levels. [This refers back to the last post regarding nutrient intake around exercise where there may be improvements in muscle protein synthesis, glycogen resynthesis, exercise performance, and anabolic hormones with intake of carbohydrates and protein around the workout. (Kinsey and Ormsbee, 2015)] Also, there are study findings to suggest an increased thermic effect of feeding (the calories being burned for eating/digesting) from eating during the daytime compared to reduced thermic effect of feeding at nighttime, which ultimately aids in increasing overall energy expenditure from daytime eating. (Kinsey and Ormsbee, 2015)

However, there are also counter-arguments that eating during specific times of the day (like first thing in the morning or late at night) will NOT necessarily dictate what, or how much, your body uses or stores, but rather overall intake does. This same principle goes against the trendy advice that eating breakfast is necessary for weight loss and weight maintenance because it ‘kick-starts your metabolism’. The theory of breakfast-eating is largely based on observational studies where the habits of eating breakfast regularly were associated with lower BMI (but again, association does not imply causation). In this case, the behavior of eating breakfast regularly could easily just be a habit of people who also happen to do their own grocery shopping regularly, and who tend to eat the same thing regularly, which could imply more caloric balance and control. In fact, a recent study showed that in a sample of overweight women that normally skip breakfast, the addition of breakfast actually increased their total daily caloric intake and body weight. (LeCheminant, et al. 2017) In this study, there was NO compensation for calories at other meals, NO change in observed satiety and appetite, and NO compensation in physical activity with the addition of breakfast. (LeCheminant, et al. 2017) This could imply that the simple advice to eat breakfast (because it “kick-starts your metabolism”) particularly in a population that does not normally eat breakfast, is less important compared to overall intake. In this case, the overall intake was NOT controlled for, and therefore the addition of breakfast led to increased energy intake and weight gain for this population.

Another big culprit for the anti-late night eating camp is the argument that eating late at night, especially carbohydrates, will spike insulin leading to fat storage. Insulin is an anabolic hormone that increases in response to nutrient intake where it helps to deliver all of the nutrients (glucose from carbohydrates, amino acids from protein, and fatty acids from fats/triglycerides) into the cells to then be utilized or stored. However, make note that insulin is not specifically associated with increasing body fat, but rather helping your cells take in nutrients. To this respect, the nutrients that you require to function and thrive, need to be delivered to the cells via insulin (which is why controlling insulin is critical in those with insulin signaling conditions). In fact, a study of nighttime snacking in a sample of young healthy women showed that the intake of a snack (200 calories) at night did NOT significantly increase insulin or affect glucose/carbohydrate metabolism, nor was weight or energy expenditure affected. (Hibi, et al. 2013) In fact, the only markers that did change significantly were increases in total and LDL cholesterol, and small decreases in fat oxidation. (Hibi, et al. 2013) These changes in lipid markers could be associated with the fact that the snack provided was composed of primarily fat and carbohydrates (50% fat, 45% carbohydrate, 5% protein) and was associated with a positive energy balance (they were taking more calories than expending) which could play a role in increasing those lipid markers and decreasing fat oxidation. (Hibi, et al. 2013) Take-home point: insulin is not to blame for excess fat accumulation, but rather excess calorie intake.

And when it comes to eating at night…

These arguments between nighttime eating and obesity have been largely associated with mixed-meal and higher calorie intake at nighttime compared to daytime dietary intake, and largely based on specific populations. (Kinsey and Ormsbee, 2015) To this effect, in populations like night-shift workers where a majority of calories are eaten at night, there is an association with increased obesity and its metabolic comorbidities like elevated triglycerides, dyslipidemia, impaired glucose tolerance and decreased kidney function. (Kinsey and Ormsbee, 2015) It is proposed that these associations are due to the combination of decreased energy expenditure and a reduced thermic effect of feeding from the nighttime meals (meaning it takes less energy to digest foods at night compared to during the day). (Kinsey and Ormsbee, 2015)

But what if it is just a nighttime snack, and NOT a majority of calories eaten at night?

More recent studies that look at nighttime snacks tend to define ‘snacks’ as small amounts (<200 calories) of a low calorie but nutrient dense food (NOT the typical high calorie and nutrient-poor “junk-type” foods), and primarily of a single macronutrient (protein or carbohydrate). In most cases, these were either protein shakes (30-40g whey or casein protein) or a carbohydrate drink (30-40g maltodextrin). [The use of a single nutrient instead of a mixed meal helps to determine if one nutrient has a greater impact than another on the outcome; like if protein is more beneficial than carbohydrate for enhancing body composition.] 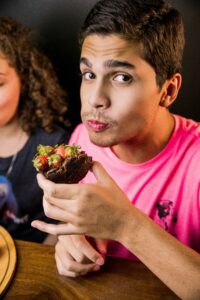 Previous studies showed that casein protein intake (40g) 30 minutes prior to sleep was associated with increased plasma amino acids (which implies effective digestion and absorption) and increases in muscle protein synthesis compared to a placebo in a sample of recreationally active young men. (Kinsey and Ormsbee, 2015) However when comparing the effects between whey protein, casein protein, or carbohydrate, there were NO differences between groups. In this study, there were increases in resting energy expenditure the following morning after a nighttime snack (burning more calories at rest), regardless of the type of nutrient provided in that snack. (Kinsey and Ormsbee, 2015)

But what about having protein at night for increasing muscle mass? It has been mentioned previously how protein plays a role in lean body mass through increased energy expenditure (from the high thermic effect of protein digestion), suppressed appetite, increased muscle mass and decreased body fat. (Kinsey, et al. 2016) The argument regarding the impact of nighttime muscle protein synthesis is due in large part to the fact that most recovery processes, like tissue rebuilding, occur during sleep. There is a natural increase in growth hormone production during sleep which drives these anabolic processes of tissue rebuilding and synthesis. Thus, the argument comes that providing a high quality source of protein prior to sleep may help to impact these natural anabolic processes during sleep by supplying readily available amino acids from digesting a pre-sleep snack of protein.

There are study findings to suggest that intake of a low calorie (about 150 calories) but high protein snack, particularly casein protein (30-40g), at least 30 minutes prior to sleep are associated with increased overnight muscle protein synthesis. (Kinsey, et al. 2016) Casein is another dairy-based protein (casein and whey are the two major proteins from dairy) where it is a complete protein that is highly bioavailable, but digests slower than whey, and is associated with augmenting muscle protein synthesis, both of which makes it an ideal choice prior to sleep. (Kinsey, et al. 2016) It was also suggested that the pre-sleep casein protein intake was associated with increased REE (resting energy expenditure) the following morning, without inhibiting fat oxidation in normal men. (Kinsey, et al. 2016) This means that there was an increase in calories being burned while at rest the following day after a nighttime snack of casein. *Casein protein powders (30-40g protein per serving) are typically used for these studies, but casein can be found in dairy products like low-fat cottage cheese (~8g protein per 1 cup) and Greek yogurt (up to 17g protein per 6oz container).

In a study of obese women, the intake of a single macronutrient (protein from either whey or casein, or just carbohydrate) was assessed to evaluate for differences in body composition, mood, and satiety. (Ormsbee, et al. 2015) This study included a sample of obese sedentary women that followed a 4 week resistance training program ( 2 days/week resistance training, 1 day/week HIIT cardio) while ingesting an isocaloric (140-150 calories) snack 30 minutes before bed every night for the 4 week duration of the study. (Ormsbee, et al. 2015) The group that ingested casein showed significantly increased morning satiety (woke up not feeling hungry) compared to the whey protein group. (Ormsbee, et al. 2015) ALL groups however saw increases in lean body mass, strength, decreased body fat and improved moods regardless of whether the late snack was protein (casein or whey) or just carbohydrate. (Ormsbee, et al. 2015) This last point is important as it is really the stimulus of exercise training and adequate energy intake that are likely to be the most contributory to changes in body composition in this population.

Take from this what you will, but never stop learning.

Download our new NF1 App, available on both Apple and Android phones today!

We use cookies on our website to give you the most relevant experience by remembering your preferences and repeat visits. By clicking “Accept”, you consent to the use of ALL the cookies.
Do not sell my personal information.
Cookie SettingsAccept
Manage consent

This website uses cookies to improve your experience while you navigate through the website. Out of these, the cookies that are categorized as necessary are stored on your browser as they are essential for the working of basic functionalities of the website. We also use third-party cookies that help us analyze and understand how you use this website. These cookies will be stored in your browser only with your consent. You also have the option to opt-out of these cookies. But opting out of some of these cookies may affect your browsing experience.
Necessary Always Enabled
Necessary cookies are absolutely essential for the website to function properly. These cookies ensure basic functionalities and security features of the website, anonymously.
Functional
Functional cookies help to perform certain functionalities like sharing the content of the website on social media platforms, collect feedbacks, and other third-party features.
Performance
Performance cookies are used to understand and analyze the key performance indexes of the website which helps in delivering a better user experience for the visitors.
Analytics
Analytical cookies are used to understand how visitors interact with the website. These cookies help provide information on metrics the number of visitors, bounce rate, traffic source, etc.
Advertisement
Advertisement cookies are used to provide visitors with relevant ads and marketing campaigns. These cookies track visitors across websites and collect information to provide customized ads.
Others
Other uncategorized cookies are those that are being analyzed and have not been classified into a category as yet.
SAVE & ACCEPT